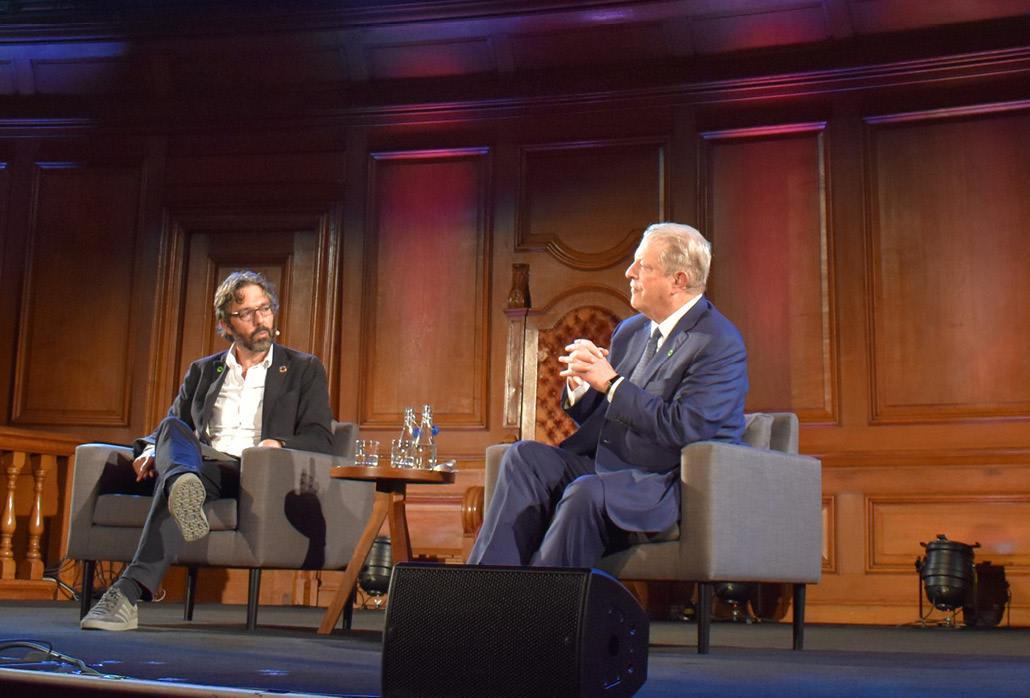 In the middle of a torrential downpour in London, former Vice President Al Gore took to the stage at the Emmanuel Centre to speak about the current state of the climate crisis and to raise awareness and support for The Climate Reality Project.

In his introduction, The Conduit’s Co-Founder and Chief Creative Officer, Paul van Zyl, set out Gore’s achievements – and the scale of the battle we face – in no uncertain terms. “Today’s struggle for climate justice is the mother and father of all struggles”, he said. “It’s the struggle that will define whether we are regarded as good ancestors or the generation which squandered the last chance to act. Mercifully, it is also a struggle that humanity still has a reasonable chance of winning. And if we do win, it will be in no small part because of Al Gore.”

From an Academy-Award-winning documentary film, An Inconvenient Truth, to a Nobel Peace Prize, Gore’s commitment to spreading the word about the climate crisis has earned him no shortage of accolades. With The Climate Reality Project, he and his team are growing a global cohort of activists to agitate for change by empowering them with tools, equipment, training and networks. The non-profit currently has 20,000 Climate

Reality Leaders in over 150 countries, making change happen from the bottom up. As Gore took to the stage to rapturous applause, he announced that he would be structuring his presentation around three key questions: must we change, can we change, and will we change?

His talk kicked off with images of the earth from space, thin shell of atmosphere clearly visible. The aim was evident: to hammer home the fragile nature of our planet and visually emphasising the narrowness of the zone we’re pumping with 142 million tonnes of manmade pollution a day, “as if it were an open sewer”.

From there, he rattled through unnerving statistics to emphasise the scale of the challenge we’re facing, taking in rising temperatures, flooding, forest fires and drought across the globe.

357 cities so far have broken their all-time heat records in 2019, while in February of 2018, the North Pole was 28 degrees hotter than usual. Global floods are now four times more frequent than they were in 1980, with places like

Houston suffering particularly badly (the city has had 3 once-in-a-thousand-year floods since 2015). The impact of these meteorological changes is increasingly difficult to ignore. 7 million people were displaced by extreme weather in the first half of 2019, while insurers have stated that weather-related disasters in 2017/18 caused a total of $653 billion in economic losses. We’re at risk of food and water shortages, pandemic diseases and dwindling resources. As areas of the world become uninhabitable, the UN predicts climate migrants could reach one billion by 2050. It’s no wonder that the World Economic Forum has named climate change as the number one threat to the global economy four years in a row.

If the first part of Gore’s presentation painted a grim picture of the future we face, the remaining section laid out the steps we need to take to turn things around. The answer in his eyes? Renewables.

While 80% of our energy still comes from fossil fuels, things are starting to change. In the UK, we get three times as much of our energy from wind as we do from coal, while solar energy is on a steep exponential curve. In fact, 88% of new electricity capacity added globally in the last year was from wind and solar, an uptake driven by developing countries without landline electricity grids. Not only does this increasing usage lead to lower costs and higher quality, it also contributes thousands of new jobs, with roles like ‘solar installer’ becoming amongst the fastest growing in the USA. As battery prices continue to fall, renewables is set to become a trillion-dollar industry. In fact, 190 global companies have already committed to moving to 100% renewables.

When it came to this final – and most important – question, van Zyl returned to the stage to quiz Gore on our chances of getting governments, businesses and consumers on board in time to make a genuine difference. The scale of the recent climate strikes show that the people are demanding change – but will it be enough?

“We have everything we need to act right now but we need policy to back it up”, said Gore, wryly pointing out that legally the US can’t withdraw from the Paris Agreement until a day after the next presidential election. Van Zyl noted that the climate uprising has echoes of the anti-apartheid movement, which was also built from the streets up, and Gore agreed, quoting Nelson Mandela: “It always seems impossible until it’s done”.

“In other movements, we’ve seen a breakthrough in consciousness just as hope seems gone”, he said, referencing Greta Thunberg’s UN speech this September, in which she told governments “the eyes of all future generations are upon you”. “I think that Greta was making a statement about the human condition: we’re by-and-large good, and when we’re brought face to face with a choice that affects the future of humanity, we’re going to go the right way.”

When asked for a closing reflection, Gore acknowledged the fight we have ahead while choosing to end on an optimistic note. “I think we’re crossing a tipping point – perhaps one that’s slightly rounder at the top – but a tipping point nonetheless.”

As the audience filed out of the Emmanuel Centre, we were left with the words on the closing slide – a quote from a poem by Wallace Stevens. “After the final no there comes a yes, and on that yes the future world depends.” Let’s hope that both Stevens and Gore are proved right.

This event was organised in partnership with the How To Academy . 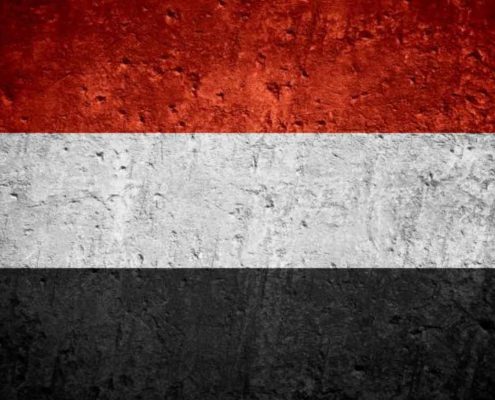 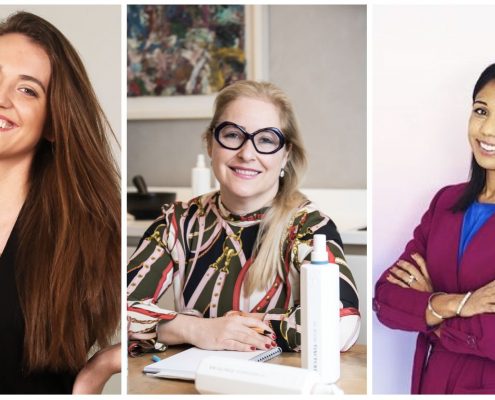 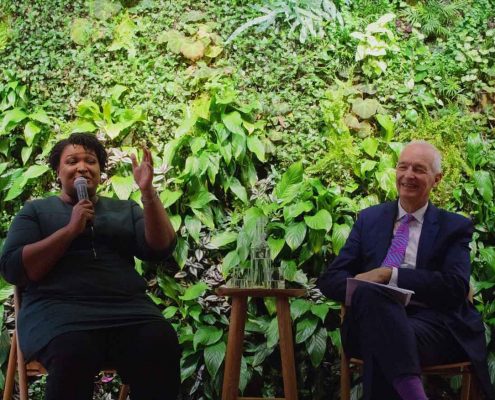 In conversation with Channel 4 News Anchor, Jon Snow, at The Conduit on International Women’s Day this year, Stacey spoke about her plans for the 2020 presidential election, the measured thought process that guides her decisions and her experience as a woman of colour in politics.
END_OF_DOCUMENT_TOKEN_TO_BE_REPLACED
https://www.theconduit.com/wp-content/uploads/2021/04/Page-1-Image-1-1.jpg 876 1296 Eddie Howell https://www.theconduit.com/wp-content/uploads/2021/04/theconduit-1080x430.png Eddie Howell2021-04-26 13:13:312021-04-26 13:13:31STACEY ABRAMS TALKS TRUMP, 2020 AND THE CHALLENGES FACING WOMEN IN POLITICS

PETER FLAVEL, CEO, COUTTS: “YOU CAN BE COMMERCIAL WHILST ALSO HAVING A STRONG...